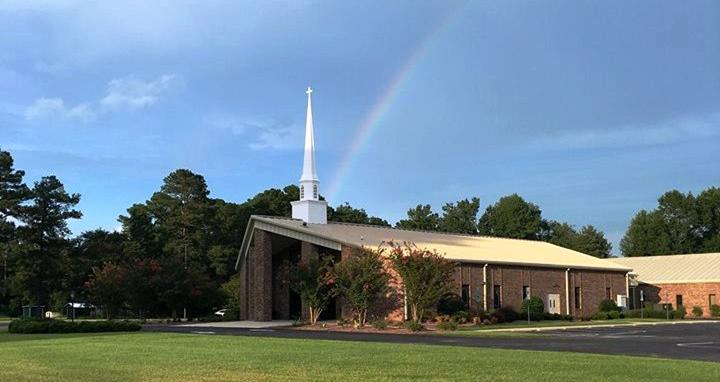 Our history is a rich one, filled with many successful events. Let us share a few highlights with you.

The Christian Church is somewhat unique in that it began in America in the early 19th century, and was not brought from Europe. Our four primary founders were Thomas and Alexander Campbell, Barton W. Stone, and Walter Scott. Although they came from different areas and backgrounds, they shared similar beliefs that Christians should and could unite by restoring the simplicity, freedom, and tolerance of the early church.

Disciples started establishing churches within eastern North Carolina in the l840's as the direct result of Thomas Campbell and his son, Alexander, having visited the area and issuing a plea "to strive for a brotherly union under the Lordship of Christ, the sheer sufficiency of the script as an adequate guide." Several churches within the Southeastern District were founded during this time: Pleasant Hill (1845), Chinquapin Chapel (1845), Tuckahoe (1849), and later Christian Prospect (1872) near Jarman's Fork.

It was in 1882 that a small group of believers from Christian Prospect bought a lot in the newly incorporated town of Richlands at the corner of what is now Hargett and Church Streets. By 1883 the first structure had been built and dedicated by pastor Henry C. Bowen. Lumber and two bales of cotton were donated by William Basden to complete the edifice. Basden and W.H. Banks were elected elders; W.C. Jarman and C.C. Basden, deacons; Isaac Brown, L.E. Duffy, and John A. Huffman, trustees.

The young congregation continued to grow during its infant years. By November of 1910 the group, under the leadership of pastor John W. Tyndall, had outgrown its building. A massive building project was begun, with over a hundred individuals working at times. Within eight days of beginning construction the larger church structure was completed and dedicated. The hurricane of 1918 greatly damaged this structure, but it was repaired and used until 1925. At that time it was dismantled and the lumber was used to partially build a large white parsonage; this structure was moved in l965 by Rodney Mobley to Foy Street.

The local church continued to grow in numbers and in spirit. During G.H. Sullivan's pastorate (1918-1922) evangelist Percy Cross held a four week revival with 65 converts. By l935, despite the Great Depression, the present brick structure was completed under the leadership of pastor W. J. B. Burrus and lay leaders, W.H. Trott, J. Parsons Brown, Leona Cox Dexter, Bertha Rhodes, Ernest Lee Huffman, Charlie B. Huffman, Simon Taylor, Guy C.Wiggins, Coy Huffman, Frank Brown, A.B. Ervin, Edward Whaley, and A.R. Rhodes. A new brick parsonage was completed in 1954 on the newly acquired Woodward property adjacent to the church. In l965, with the movement of the old parsonage, a new educational unit was completed; in 1979, the Scout Hut and picnic area were added. Since that time a steple was attached to the church (l994) and a brick garage/storage building (l995) was constructed. In 2003, in hopes to expand the Social Hall turned in to the hopes to build a new facility when the Etta Mae Trott heirs sold the church property on Trott Rd. The church facility that currently exists was built an completed in 2005 where we are today. We have added a Christian Life Center in 2008, a Picnic, Garage and Playground. God has truly blessed us.

However, the Church is more than just buildings. It is a brotherhood of believers who strive to follow the examples of Christ. First Christian is exceptionally proud of the twelve individuals who call it home and have dedicated their life to Christian service: John T., Joseph A. and D. Guy Saunders, Andrew Askew, Clem Cox, Abijah Jarman, Amos W. Huffman, Dr. Cecil A. Jarman, Fraulein Jarman Maloka, Dr. Donald Gene Farrior, Philip N. Jones,Lynn Maxwell, Dr. Gary Edens, Rev.  Kimberly Holley and our most recent servants Pastor Mark Reid and Pastor Samuel Wente.